So our first day, traveling to Santorini. We had to wake up early due the fact that it was one of the most busiest days at Schiphol. We were leaving at 3 o’clock so we had enough time the get our plane, but we needed 30 minutes the get behind the customs. So enough time for a good breakfast. After this we took our flight to Santorini. Once we were in the plane, we had to wait 25 minutes before take off.

After a good flight, we finally arrived in Santorini. So we picked up our car and we went looking for our appartment in Akrotiri. After a few dead ends we finally found it and we did take a dive in the swimming pool. It was lovely after a long and hot flight.

Just before sunset, we went for a walk through the narrow roads of Akrotiri. We found an old Venetian castle on the top of the mountain. After looking around we had a delicious Greek dinner at Theofanis Family Tavern. And now, time to catch up some sleep… 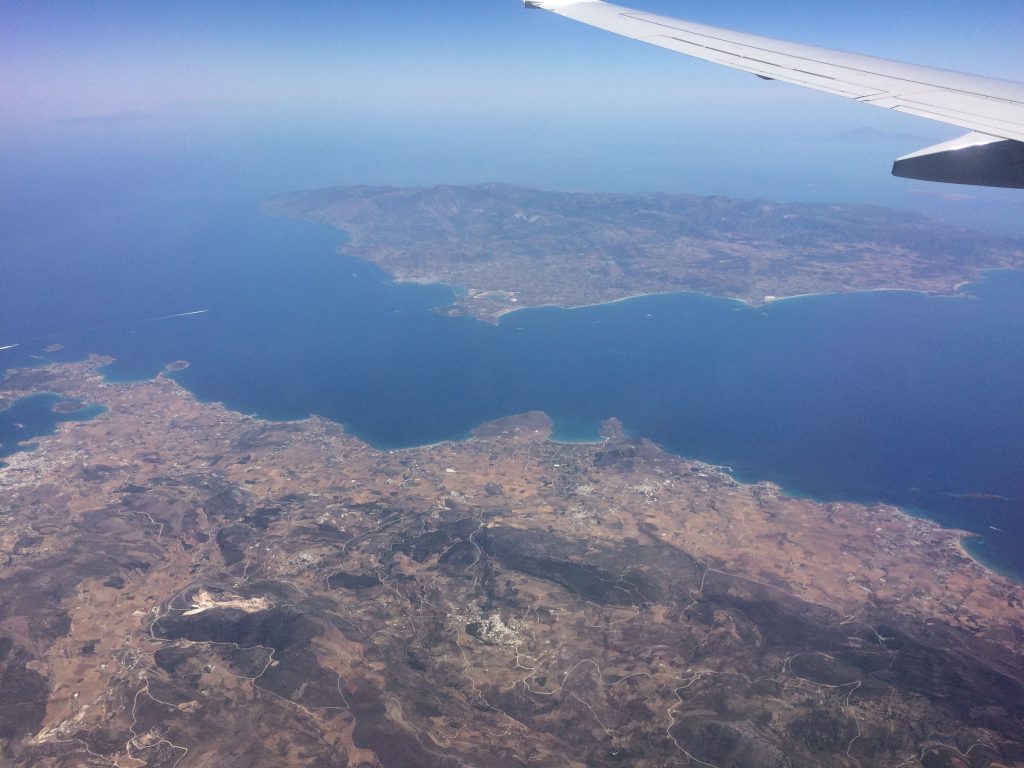 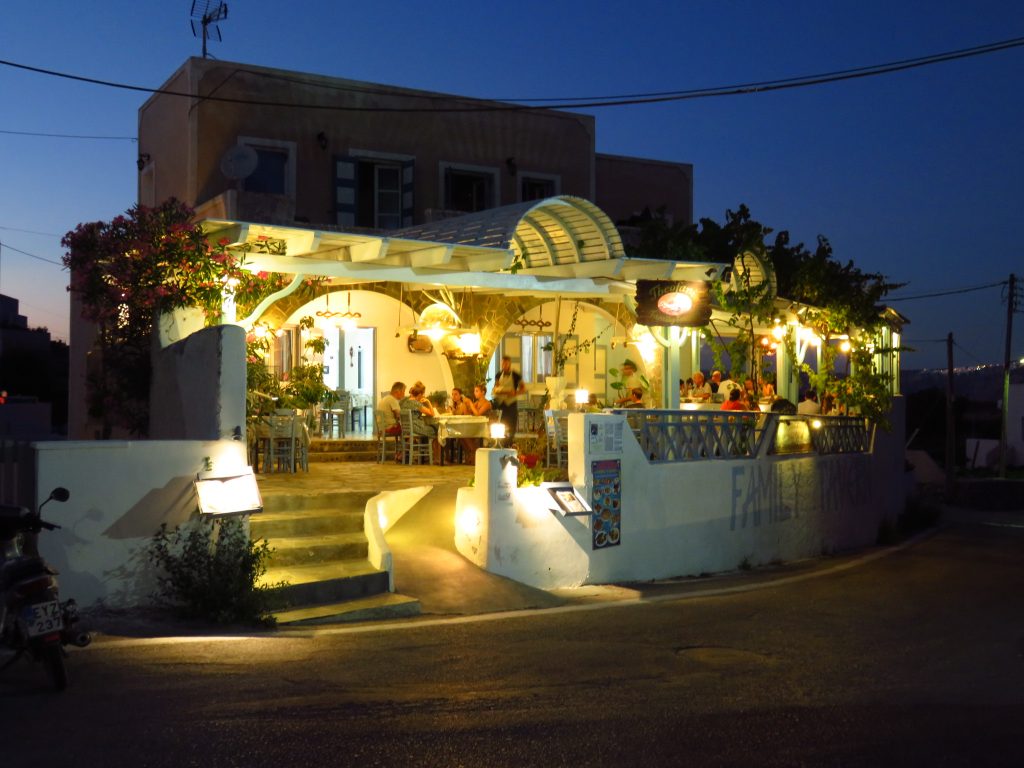 After a good night of sleep we went out to the excavation side of the old Akrotiri. Here they found the remaining of the old town. The “new” town is further up the hill. While wandering around the excavation side you will reconice the city layout, and some house interiors. TIP: go as early as possible. We where here at 10:00 and when we left, multiple busses arrived.

We now headed to the town Perissa, to get here we did take the road from Agios Georgios. You will drive along the black beach and its bars / taverns. When we finally reached Perissa we found a place on the nice looking black beach. But a black beach has its downsides, for example you need to run for the see when leaving the safe place on your towel. Its a bit like the game “the floor is lava” but in this case the floor is really hot!

After our real live session of that game, we went back to our apartment to cool down and prepare ourself for a trip to Oia. Please be patient when traveling to Oia, because many people are doing the same.

Despite it was crowded, the town looks amazing. Many white houses with blue rooftops, narrow roads and an amazing view. We decided to find a nice restaurant with a Caldera view which was (also less expensive). When we finished our dinner we went back to our appartment. 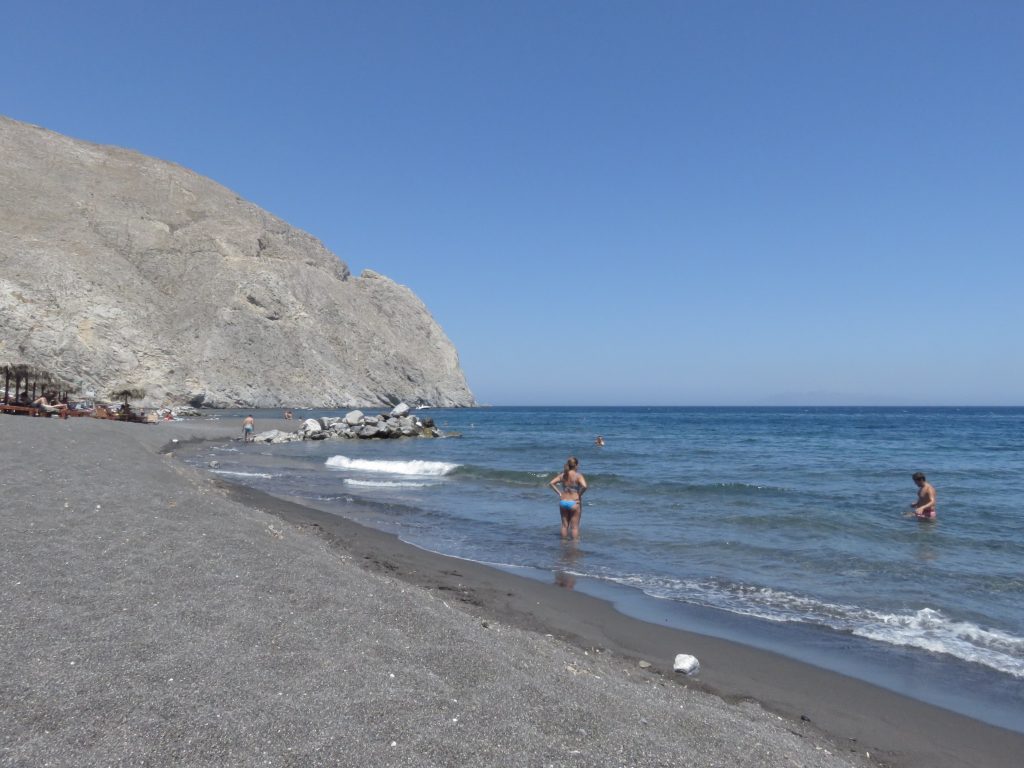 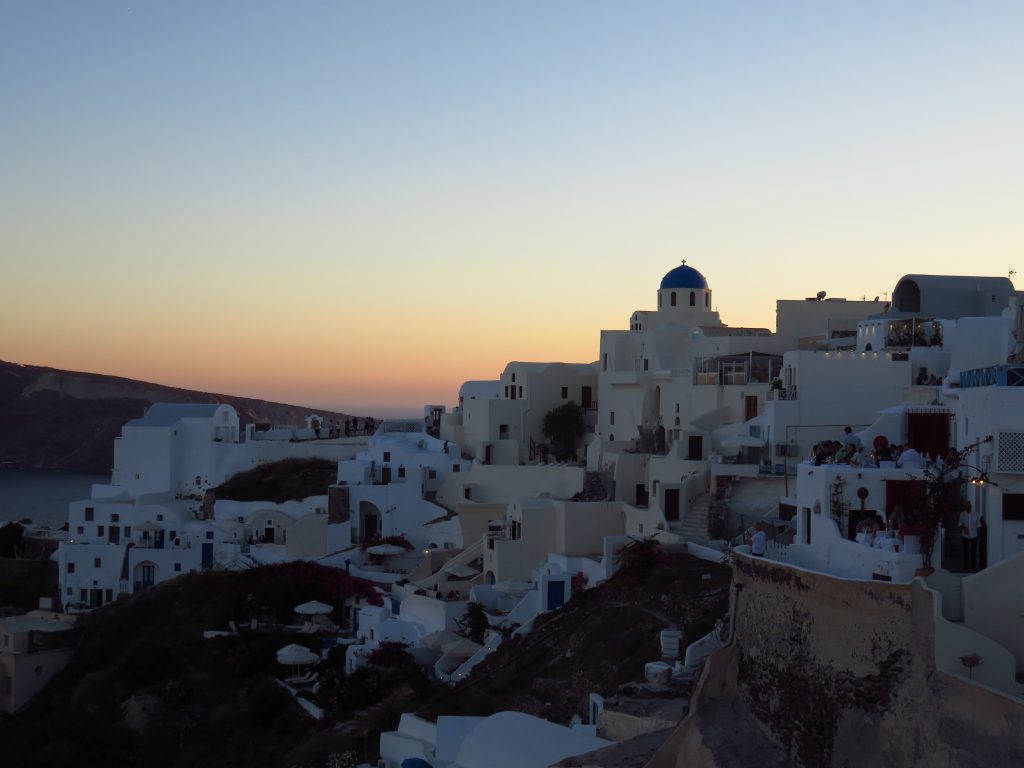 We tried to get up early and go to Fira, but our early wasn’t that early. At the time we arrived at Fira almost everyone did. So we started to wander around the old part of the city. This part has narrow street with the familiar white houses. Behind these houses you have an amazing view over the caldera. Unfortunately we did not make it to the top of the city, it was way too hot.

After wandering trough the busy streets of Fira we decided to go the Colombo beach. This beach is well hidden on the other side of the island. So the first time we missed the small path to the beach, but finally we managed to find it. When walking down towards the see, the beach remains hidden for a long time, so the reward is great when you are finally there. A beautiful beach with a large rock on one side.

While enjoying the quiet beach our water was almost running out, so we dicided to go to Kamari Beach. This beach has plenty of bars and also free beds when you get a drink. If you like to watch planes, you’re at the right place here. 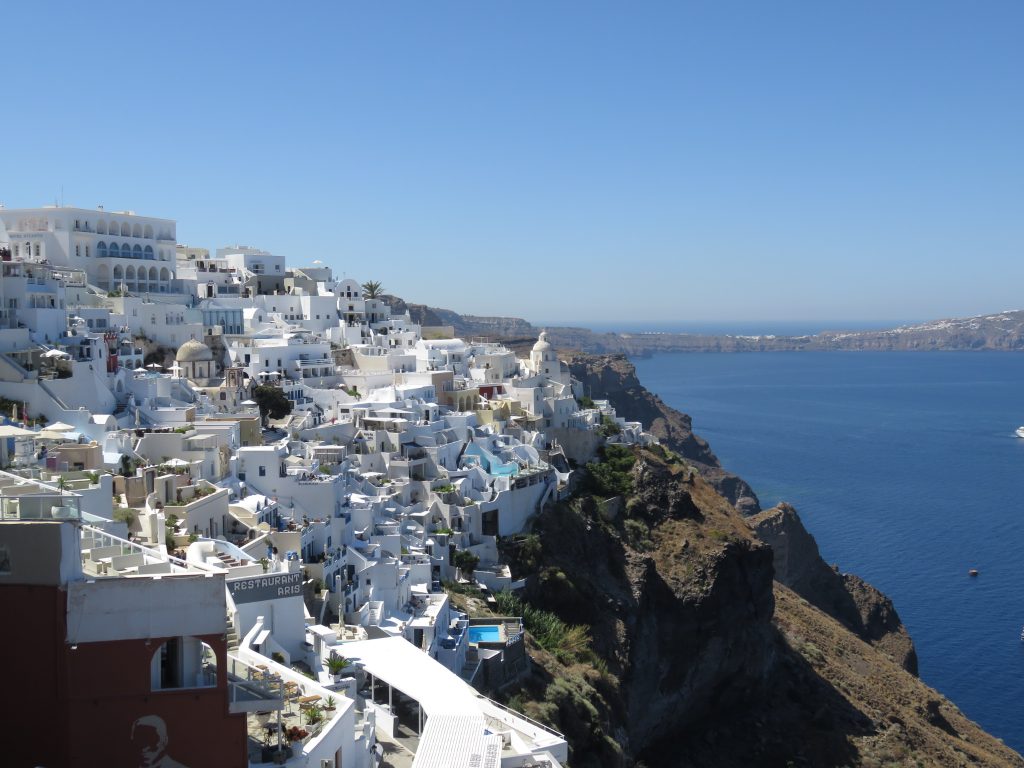 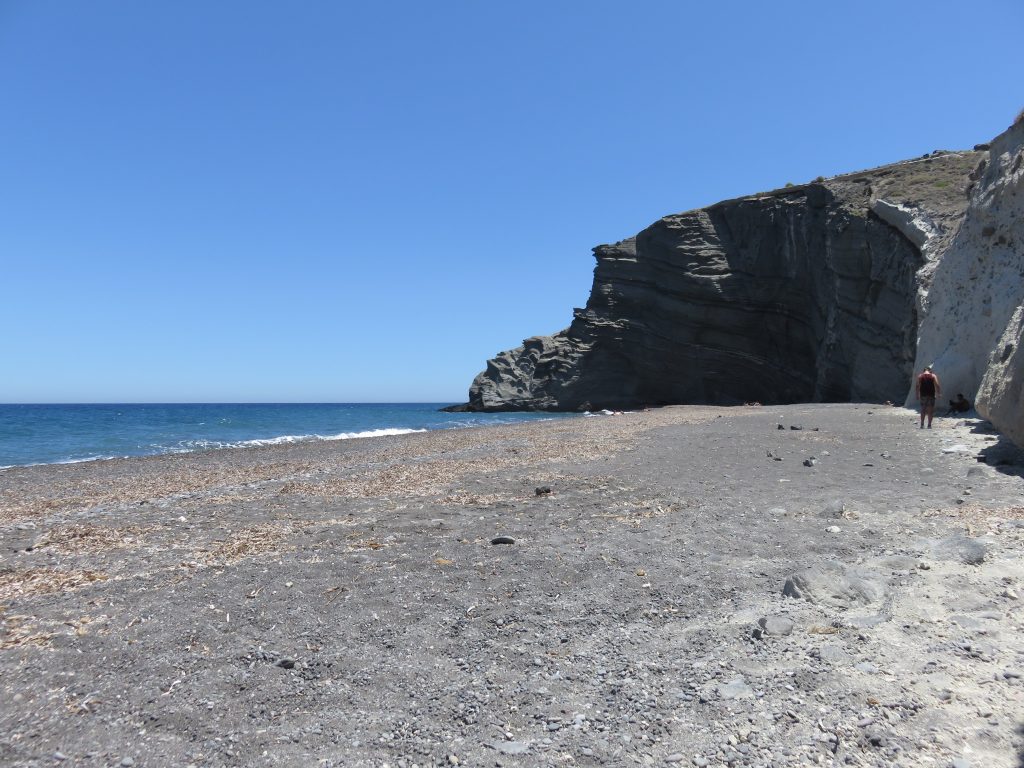 Today we first visited Fira and Oia again, for some shopping. Fortunately it wasn’t very busy this time, so we enjoyed the small streets full of little shops. When we finished our shopping time, it was time to get down to Ammoudi Bay.

Ammoudi Bay is a small port with little and colorful fishing boats. The bay lays direct beneath Oia. It gives you an amazing view over the clear sea. While we where eating some seafood, we saw plenty of fishes swimming next to us. Our table was on the edge, so we had a good and amazing view.

So Ammoudi Bay was the first end of the island. The second one has a lighthouse on it. We went over here while enjoying the sunset. TIP: this place is less crowded then Oia. 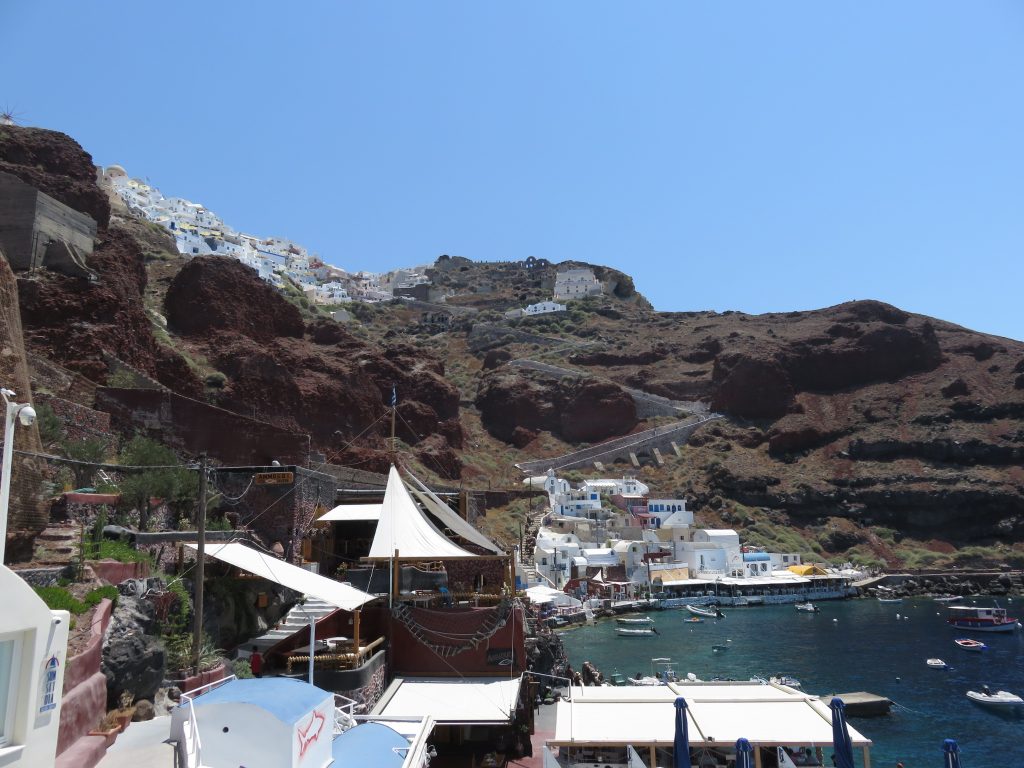 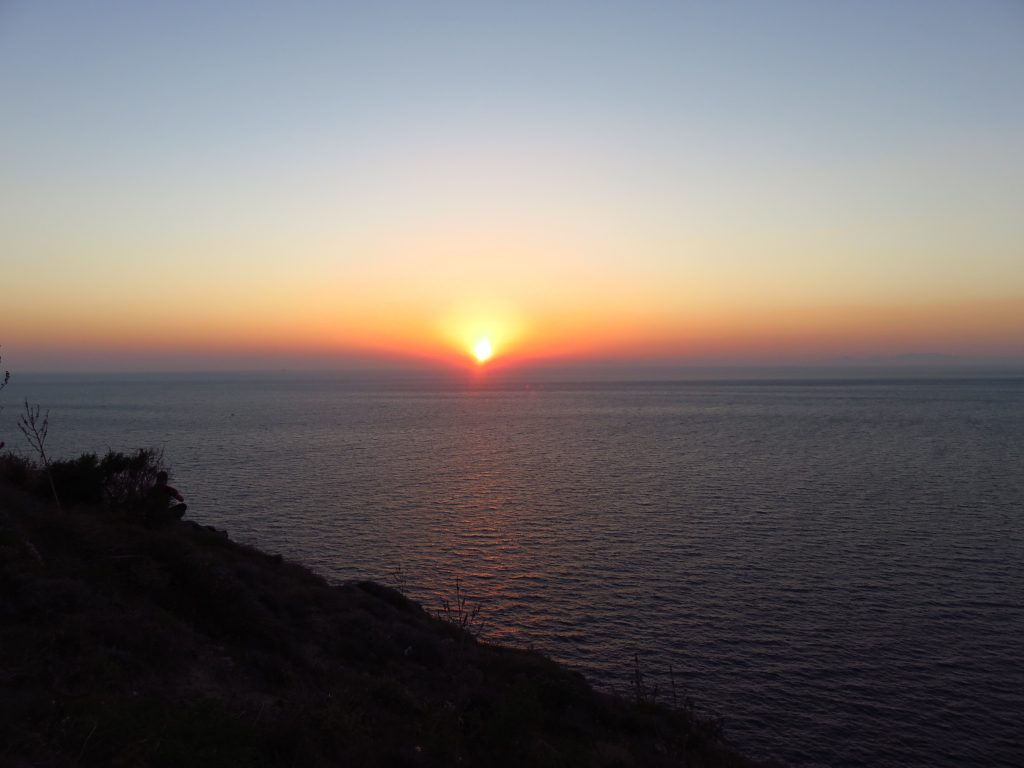 Day 5: Pirates of the Cyclades.

What an awesome day we had today! Sailing the Cyclades on a pirate ship and drinking wine instead of rhum. First we were sailing to the old port of Fira and then we headed to the volcano. We had a walk there to the top, with beautiful views. The heat wasn’t coming only from the sun, but it seemed to be coming from the ground too. Despite the heat it was really nice to see all these lava rocks and craters. Sometimes we saw smoke coming from those rocks. The smoke had a special, volcanic smell.

Back down at the boat we sailed to the Hot Springs. Jumping from the boat into the water was really nice after a really warm walk on the volcano. While everybody was swimming, the crew was preparing the barbecue for dinner. Back on the boat we started to get hungry, because of the smell from the barbecue…

We were sailing to the island Thirasia. A small island with 3 villages and crystal clear blue water around. The blue water called us to get in, so we jumped again from the boat.

Back at the boat, dinner was ready. Time to say ‘Yamas (cheers)’ with a glass of Santorini wine. The crew made some traditional Greek food for us. It was really lovely to have dinner like this with the sun on our sea salted faces.

At last we sailed to the port of Oia and Ammoudi Bay to see the sunset. While enjoying this beautiful scenery we headed back to the port.

Because of the low battery, we’ll add the pictures later when we are on the next island 🙂 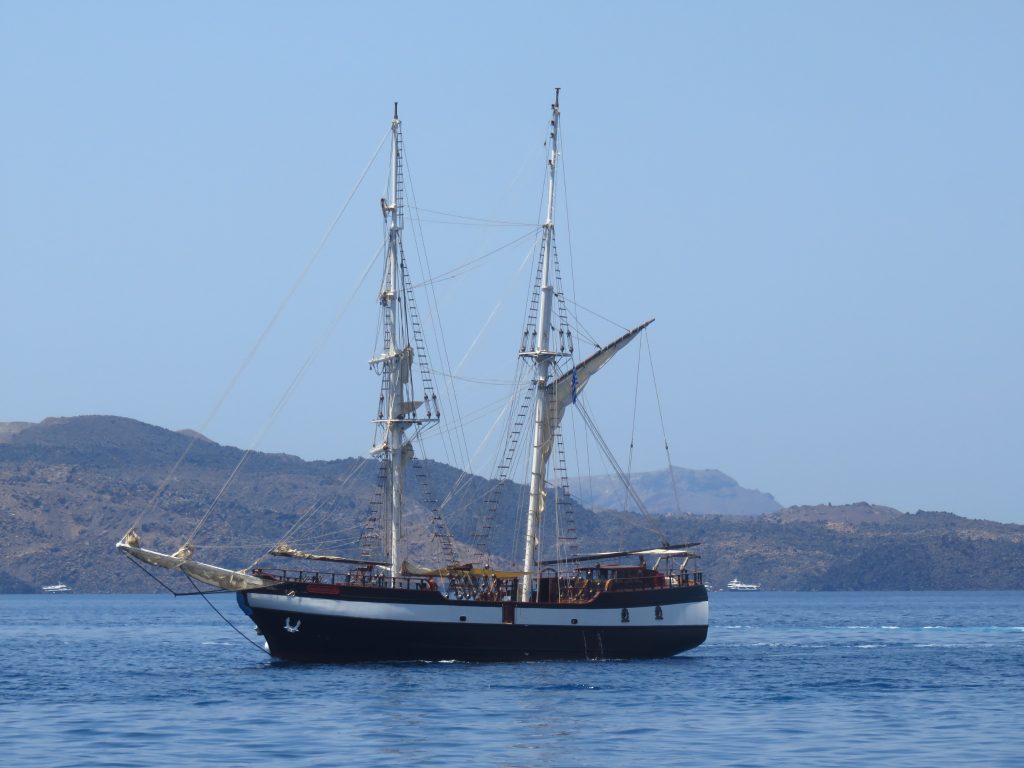 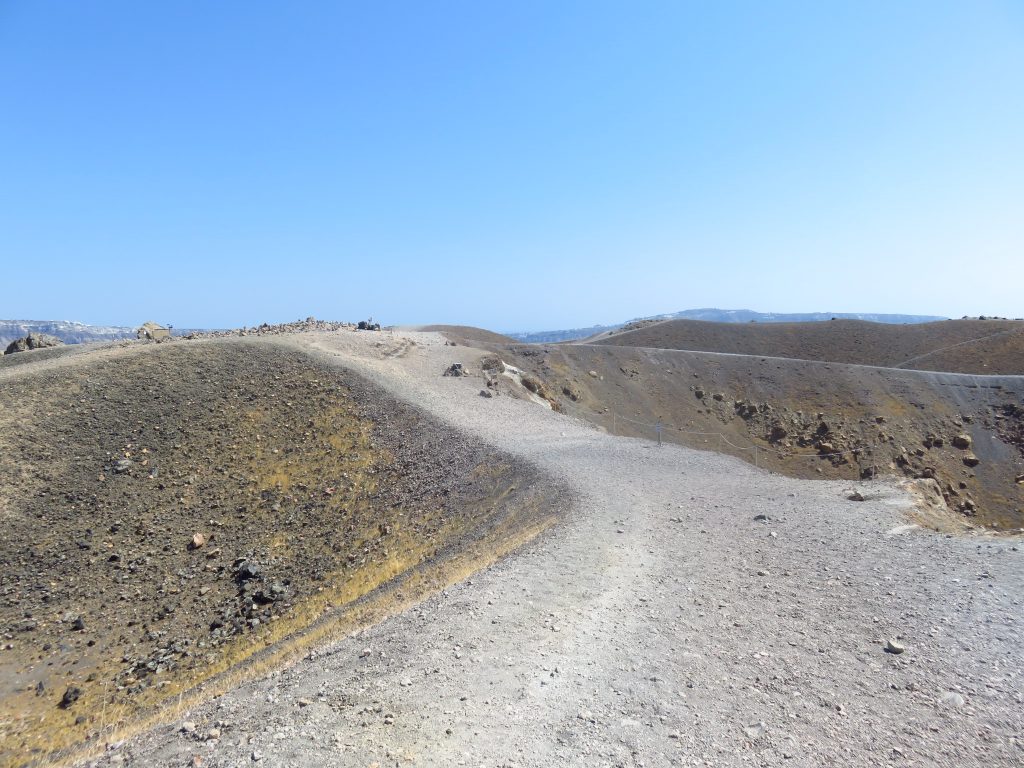 Day 6: Traveling to the next island.

Our ferry boat was leaving at 15:30 from the port in Santorini. Yesterday it wasn’t so busy, but today it was so crowded and chaotic. People everywhere waiting or arriving from boats, busses and taxi’s were driving almost through each other and so on…It was just going the Greek way. After waiting a couple of hours, watching all those people, we were leaving Santorini.

One thought on “Our summer in Greece: part 1 (Santorini)”